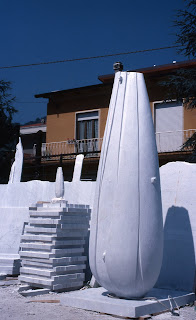 In the mid 1980's Mason was one of a small group of locally based artists chosen to create public artworks for an initiative jointly stimulated by Nottingham City and Nottinghamshire County councils.  With support from East Midlands Arts, through advice from the Visual Arts Officer David Manley, City Technical Services Director John Haslam selected a number of proposals for consideration.  Paul Mason had produced a small maquette in marble for a large work that he envisaged in the same material that would take the form of a fountain.

This was chosen (alongside pieces by Richard Perry & Hilary Cartmel) to be in the vanguard of an ambitious scheme of re-envisaging the city (to include better street furniture, plantings and surfaces) along the lines of other Continental cities that Haslam had seen on recent excursions to Germany and elsewhere.  For Mason it required a deal of research and the eventual contracting of an Italian marble quarry to supply the stone.  As importantly it further stimulated an interest in Italy and particularly in the marble quarries and the Apuan Alps region of northern Tuscany.

Following initial visits the artist dispatched the maquette to the workshop in Italy where a phone call suggested the masons there "might rough the stone out" following the form from the piece sent through to them.  The artist was therefore surprised to arrive in Italy to find the piece very nearly completed!  The photo above shows the stone when the artist arrived in the yard...and the one below as sited in Nottingham.  Mason recalled that the workers in the yard told the story of Henry Moore similarly finding a piece virtually completed.  On that occasion the press were invited and with a photo of the 'maestro' about to be taken of him 'finishing' the piece with chisel in hand...the master carver of the yard stepped forward advising that he was holding it at the wrong angle!  Anyone who has visited Carrara, Massa or Pietrasanta and seen some of the exotic pieces carved from this material will see just how complex some of the work can be.

The sited work has been controversial from the beginning.  Like the Beeston piece Water Head, it has been much discussed.  My contribution to this can be found here, in an interview with Tamar Feast. 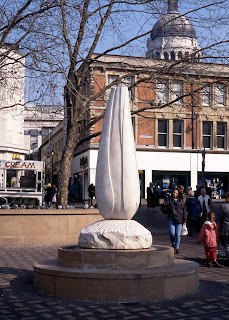 Posted by David Manley at 08:48 No comments:

It is rare that a PWM work comes up at auction.  Rarer still outside of the Capital.  But here we have Shifting Ground, a collage from 1985, 23.5 x 63 cm.  It was one of the works in The Cutting Edge, the large, one person exhibition that opened at Bolton Museum & Art Gallery in 1987 and touring to Wolverhampton and Lincoln. It is related to the series of low bas-reliefs  in marble produced in the early nineteen eighties, several of which found their way into public collections.  This piece is featured in the auction of Modern & Contemporary Art at Tennants in Leyburn, North Yorkshire in six days time (10:30 am., 20th October, 2018).

Posted by David Manley at 02:42 No comments: 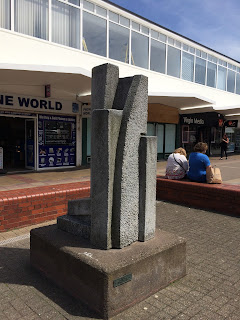 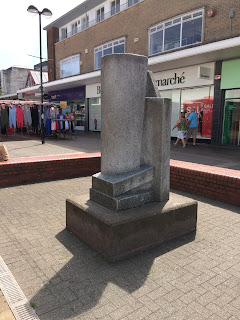 Commisioned in 1979 Vertex is the first of the artist's many public works.  Sited in the centre of Harlow New Town on the Broad Walk the piece is in remarkably good condition as seen on the day of my visit (July 2017).  This is in no small part to the choice of a dove grey bardolino marble sourced from Carrara.
Posted by David Manley at 09:12 No comments: 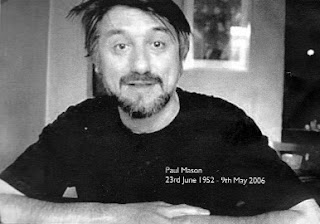 In a published interview at the time of the exhibition The Cutting Edge curator Rebecca Morris asks the artist Paul Mason  “do you think you have an important role to play in making works for public places”?

“Yes, very much so. There was a time when sculptors worked with planners and architects as a matter of course.  Recently though, there has been a resurgence of interest in putting works out-of-doors and in public places, which has been very exciting.  It is much more interesting to go into a place where there is sculpture as long as certain formal criteria have been considered such as the scale of the work, its texture, colour, how it relates to the surrounding space, etc.  These are qualities that sculptors are dealing with all the time.  I think the work of sculptors can encourage movement in and around and though a site, so rather than people rushing through a space and not pausing, a sculpture can slow them down, make them pause for thought and hopefully also enhance their lives.”

The passage of time and the seemingly endless disturbances in many urban environments nowadays can play havoc with the siting, condition and context of contemporary sculpture.  Taken together with the medium’s capacity (still) to stir up controversy these conditions often impact adversely on work made for public sites.  Mason’s work is no stranger to such events.  Indeed several public commissions, all less than forty years old, have been either re-sited or, worse still, destroyed in the recent past.  However, from time to time, some have been rescued from relative neglect and either restored or re-sited through the sensitivity and determination of supporters.

On 9th May 2017 one such - Leaf Fields - was rededicated in St. Albans through the combined efforts of initial commissioners and supporters, current public officials and determined lobbying from the Dean of Cultural Affairs and Director of University of Hertfordshire Arts Chris McIntyre.  Sandy Walkington, one of the original commissioning group spoke to the controversy that attended the selection of the work at its initiation - through financial support from the Hertfordshire Association of Architects (the local branch of the Royal Institute of British Architects) and told of the circumstances of its siting in St. Albans - allegedly the first such work in the city.

The passage of time makes its mark on the work too of course. Especially so with a material like Clipsham limestone.  Mason was at pains to carve pieces to sit against the grain of the material so that a degree of protection is afforded to those surfaces that have not been polished.  But such open surfaces as those where the evidence of the plug & feather marks remains are especially vulnerable to colouration and colonisation by lichens.  In Leaf Fields these are visible on the undersides of the ‘prow’ of the piece as it is positioned in the raised bed.  Whether or not the piece would benefit from significant restitution is debatable though some delicate removal of the organic material would reveal and restore the artist's intentions for the work.

Posted by David Manley at 00:11 No comments: 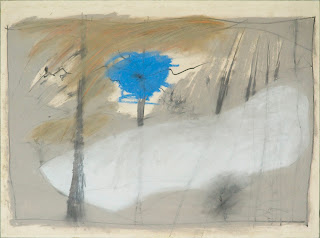 This is a pastel drawing from 1986 on a sheet of T. H. Saunders 190gsm watercolour paper (56 x 76 cm.).  It was exhibited in 'The Cutting Edge' exhibition at Bolton Museum & Art Gallery (that subsequently toured to Wolverhampton and Lincoln) and is in a private collection.  Tarn Hows is a small tarn (mountain lake or pool) not far from Hawkshead, the centre for Grizedale Forest and its arts project.  Paul undertook a short residency there in 1981 and the resulting works were made and exhibited in the forest for some years (the extract below from A Sense Of Place - Sculpture in Landscape, Ceolfrith Press No. 73, 1984 shows them in situ).  In his commentary Paul talks of revisiting Grizedale over successive autumns following his residency with students from Loughborough College of Art where he taught on the BA (Hons) programme.  The drawing above is the fruit of one such expedition. 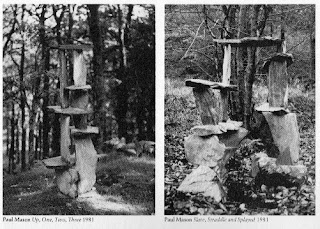 In A Sense Of Place Paul remarks "It is difficult to assess what changes [in his practice] are due to Grizedale Forest. I have visited it each autumn for several days with students, discovering new sculptures and different parts of the Forest. Re-orientating past and current perceptions each visit.  The sharply contrasting pace of life and environs leaves an endless series of images and spaces."

Posted by David Manley at 04:09 No comments:

Courtyard, marble, 21 x 26.5 x 2.5 cm., dates from 1985 and was commissioned by Harlow Council.  It sits in the Gibberd Gallery within the Civic Centre.  The Essex town also houses Vertex, Mason's first commissioned public work and his first major work Hinge purchased by Sir Frederick Gibberd.  It was chosen to celebrate Alan Mead's service to the town as its Treasurer.  Sir Frederick Gibberd, the town's Master Planner, stimulated the collection and placing of works of contemporary art throughout the town.

Posted by David Manley at 05:49 No comments: